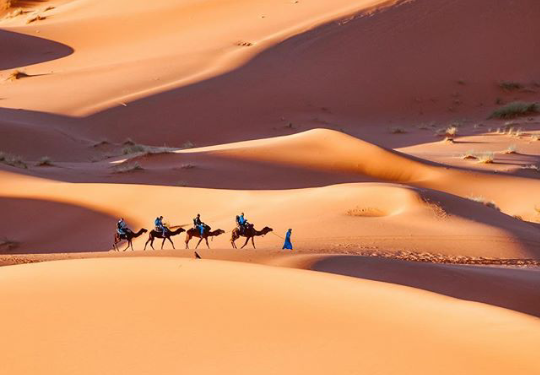 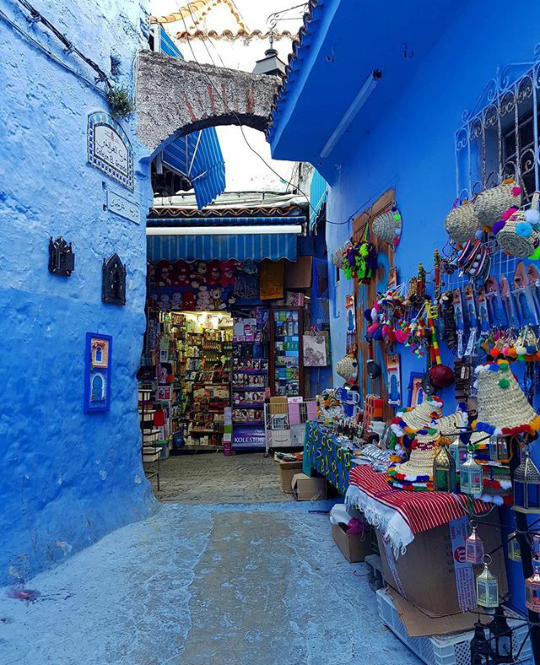 Upon arrival, our driver will pick you up from the airport and, from there our wonderful journey together is going to start.  A friendly guided tour is programmed in the economic capital, and the largest city of Morocco, “Casablanca “.We are going to see “Hassan II mosque “,  the 5th biggest mosque in the world, with its tallest minara in the world standing partly over the water. Then the Habous district, the Royal Palace, the Mohamed V square, the residential area of Anfa and outside of the mosque Hassan II. Optional fish lunch at the seaside .Afterwards, we are going to visit, “Rabat”, Morocco’s capital city, one the country’s four imperial cities, where you are going to explore One of the most unique sites in the country of Morocco is the Kasbah of the Udayas or also referred as Oudayas Kasbah. This site was originally built in the 12th century and was renovated many times throughout the centuries and it has been home to numbers of Andalusian immigrants, Then see the tower of Hassan, the minara of an incomplete mosque, which was supposed to be the tallest minara in the world.Eventually we will arrive at Chefchaouen Beautifully perched beneath the raw peaks of the Rif,  one of the prettiest towns in Morocco, an artsy, blue-washed mountain village that feels like its own world. with its   old medina,  a delight of Moroccan and Andalusian influence with red-tiled roofs, bright-blue buildings and narrow lanes converging on busy Plaza Uta El Hammam and its restored kasbah.

Overnight at a Riad.

After breakfast in the Riad, we are going to leave the unforgettable Chefchaouen towards a special destination, The city of Fes, also known as the scientific city of Morocco because In its heyday, Fes attracted scholars and philosophers, mathematicians and lawyers, astronomers and theologians. Craftsmen built them houses and palaces, kings endowed mosques and medersas (religious schools). On the way we will  have the opportunity to visit “Volubilis “, Roman ruins well preserved in this historical place and, also we are going to visit the magnificent city of Meknes  also known as the Ismaili capital, where you will have the chance to walk around and the discover this historical magnificent city.

Eventually we will arrive at Fes, where you will spend the night in a hotel.

After Breakfast, you are going to explore, the historical ramparts of the Medina of Fes . See the historical “Marinid tombs “, visiting the 14th century “ the Madrasa Bou inania “,and its  excellent museum, with its rich collection of illuminated manuscripts, and ceramics.Enjoying lunch in the MedinaThen you are going to resume exploring the fascinating cobbled lanes of the Medina, and the richly decorated Attarin’s madrasa, Also the funduq of nejarin, and the medieval tannery,  and the infinite variety of handicrafts, copperplate and pottery.

Eventually, after an entertaining day, you are going to spend the night in a Riad.

After breakfast,  we are going to continue towards our next destination, “Ifrane”, also known as “Switzerland of Morocco”.  passing through Atlas mountains which contains the largest forests of cedar trees, that is inhabited by monkeys. After a quiet stay. we will resume towards the tizi ntalghamt pass to Midelt passing by the spectacular Ziz gorges. we will head out to the magnificent Merzouga via  Erfoud, passing by the spectacular ziz gorges and Errachidia Where you are going to eat a traditional lunch among Berber people and there hospitalityNext we will continue towards merzouga along Ziz Valley, and stopping for what we like to call it ” a worth stop” for the panoramic views along the way.When arrived to merzouga,  you will be welcomed by a warming mint tea to restore, then will switch to camels, that  will take you through the magnificent world of the sandy dunes of erg Echebbi . In a memorable experience on the top of the camels you will admire the spectacular sunset in the Middle of the Sahara.Eventually, the camels will take you to our traditional well equipped camp, where you will enjoy a traditional dinner, while listening to a berberine music show, in a friendly mood under the stars.

In today’s program after breakfast in the capm, we will explore the surrounding areas of the marvelous desert of l Erg Echebbi’s . You will have the opportunity to see the lake Dayet Srji, that attracts flocks of pink flamingos ; Birdwatchers will enjoy this quiet area. Afterwards, we will explore Khamlia and, meet the locals and, know more about their daily life. You can also find desert reptiles and mammals. In Khamlia, known by its habitants , the black people who were slaves from Sudan. With their hospitality, You will be welcomed with a cup of tea while enjoying their spiritual Gnawa music. Leaving Khamlia after our traditional lunch “Berber Pizza”, we will do what we like to call it a worth stop to enjoy the panoramic view of golden dunes near the Algerian border. We visit a nomadic family, taking care of herds of cattle, goats and camels. You can meet members of the family and get to know about their way of life while enjoying the taste of a good cup of tea. After this you will have the opportunity to visit the sites of black volcanic rocks, near Yasmina Auberge, where you will be amazed at the scene of the dunes, along the nearby lake. In the afternoon we will ride the camels back into the golden dunes to enjoy sunset in the middle of Sahara, to conclude the day by a traditional dinner in the camp while enjoying berberic music.
Overnight in a well-equipped nomadic camel hair tent.

In the morning, before breakfast, it’s recommended to wake-up early so you cannot miss the spectacular sunrise of Merzouga in the middle of the Sahara. Afterwards we are going to ride camels back to the hotel where you can take a relaxing shower and a breakfast before resuming our  tour towards todgha gorge one of the most spectacular canyons around the world passing by the beautiful ziz Valley, in todgha you will have the opportunity to hike among local people to enjoy todgha’s Beauty.

Eventually we will reach Dades gorge, where you will spend the night in a traditional kasbah.

After breakfast, we will resume our journey through the Dades Valley, towards the beautiful city of kalaat mgouna a city literally covered in roses, a carpet of roses as far as the eye can see, then Ouarzazate also known as ” African Hollywood “, passing through the enjoyable path of the thousand Kasbahs passing by tiny Berber villages where you can take some great pictures.Next we are going to continue towards Skoura, where you are going to explore the well preserved Kasbah of AmeridilAfter lunch in front of the spectacular area, we will continue towards our final location of today passing by interesting places and far reaching views. Eventually we will arrive to Ouarzazate,

Overnight, will be in a hotel

After a traditional breakfast,  we are going to explore Ouarzazate the city that attracted with her unique landscapes many producers to give it a part in the film,  with her biggest film studios in Morocco. And of course the famous kasbah of taourit. Next you are going to head out to explore the famous Kasbah of Ait-Ben-Hadou, a world Heritage site, which was a part of many universal films such as “Gladiator” .Afterwards, you are going  to experience the beauty of atlas mountains via the road of Tizi-n-Tichka the highest road in Morocco with an altitude of 2260m, offering you charming views as far as the eye can admire, valleys, oasis, mountains, and Berber villages. Eventually, arriving to the red city “Marrakech”, where you are going to stay in a local Riad.

Overnight and dinner in the Riad.

After a relaxing night in the beautiful Riad, what a better way to start your day than a Moroccan traditional breakfast, to complete our full day discovery of “Marrakech “. First a horse-drawn ride, around the city’s containers of a decades of history “ the red ramparts “, followed by a traditional lunch, in the old medina.After restoring energy, we are going to resume our tour, to discover the rich heritage side of Marrakech, such as the “koutoubia mosque “, the “minara gardens “, the “Bahia palace “, The “ Majorelle garden “, and the magnificent “Dar si said palace “.Also the museum of jewelry, and the maze-like alleys, where souks (market places) , sells traditional clothes, leather-work, and so much things if you are interested to see, to know or even to buy a souvenir.

Conclude our day back in the Riad to spend the night.

After breakfast in the beautiful Marrakech, we will Drive back to Casablanca, to transfer you to the airport based on your flight info, where unfortunately our unforgettable experience will end.