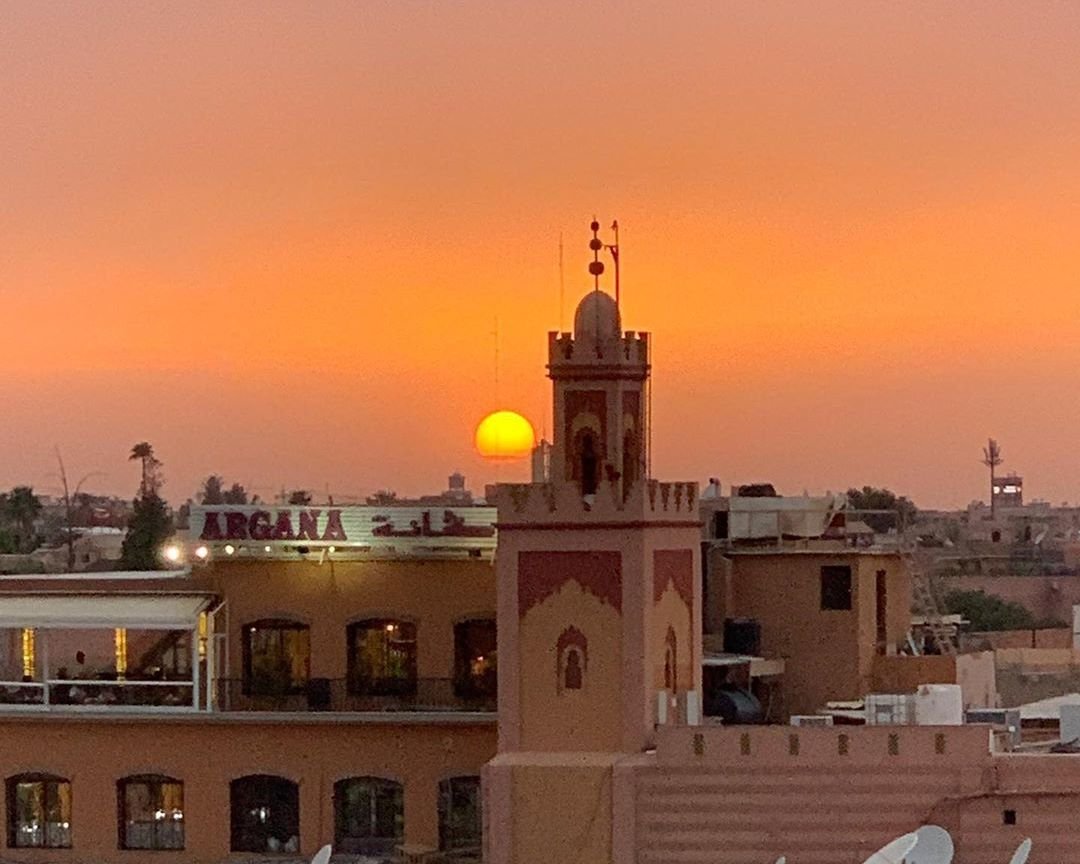 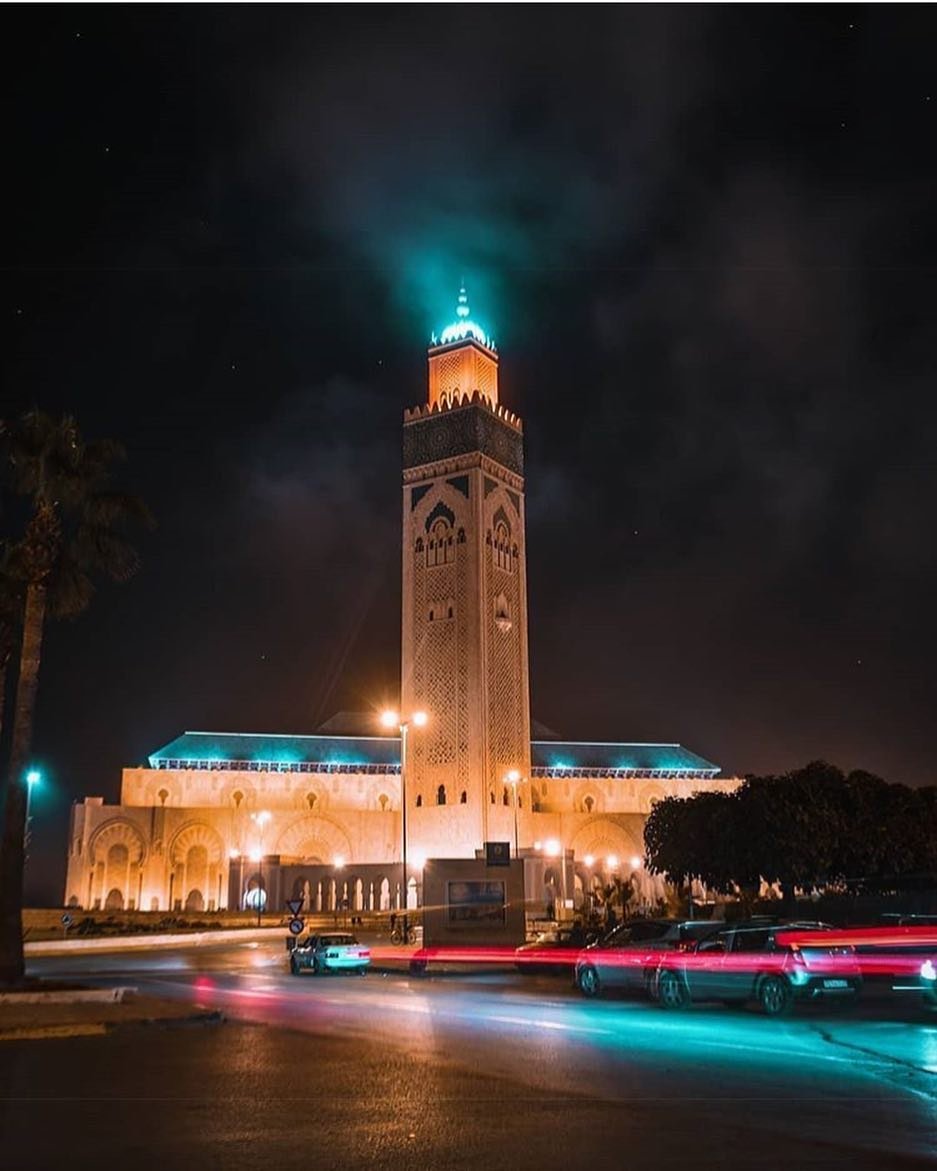 Upon arrival, our driver will pick you up from the airport, to take you to your hotel. And here where our wonderful journey will begin ; for today you will have a day free to relax, at evening you will enjoy dinner at the magnificent Place of jamaa el fna, where fortune tellers, snake charmers, musicians, will compete for your attention.
Overnight in the hotel.

After, enjoying breakfast in Marrakech, we are going to resume our tour for a special a destination on this journey, “Casablanca “, the commercial capital, and the largest city of Morocco. A blend of moorish style, and European art decoration. Where you are going to visit, the 5th largest mosque in the world, with its world’s tallest minaret. Standing partly over the water; then we will visit the new town. Afterwards, we are going to visit, “Rabat”, Morocco’s capital city, one the country’s four imperial cities, where you are going to explore One of the most unique sites in the country of Morocco is the Kasbah of the Udayas or also referred as Oudayas Kasbah. This site was originally built in the 12th century and was renovated many times throughout the centuries and it has been home to numbers of Andalusian immigrants, Then see the tower of Hassan, the minara of an incomplete mosque, which was supposed to be the tallest minara in the world.
Eventually, you are going to spend the night in a traditional Riad in the heart of the Medina.

After a traditional breakfast in the Riad, we are going to resume our tour towards, a special destination, a historical city known as, the Ismaili capital of Morocco ,the city of Meknes. Where you are going to see the famous historical gate of “Bab mansour el alaaj “, Also the second known Plaza in Morocco after the plaza of jamaa lefna in Marrakech, the plaza of “Lehdim “, next you are going to see the Basin of “Sahrij souani “, and explore the Moulay Smail Mausoleum. After lunch, and by staying in the mood of history ,our next location is going to be from the 25 BC, “Volubilis “, the site of Romans ruins.
Eventually, we are going to continue towards our final destination of the day, the “Athens of Africa “ the city of “Fes”, the oldest city of Morocco, a city that gained the reputation of the religious scholarship. Where you are going to spend the night in a Riad.

After Breakfast, you are going to explore, the historical ramparts of the Medina of Fes . See the historical “Marinid tombs“, visiting the 14th century “ the Madrasa Bou inania “,and its excellent museum, with its rich collection of illuminated manuscripts, and ceramics. Enjoying lunch in the Medina Then you are going to resume exploring the fascinating cobbled lanes of the Medina, and the richly decorated Attarin’s madrasa, Also the funduq of nejarin, and the medieval tannery, and the infinite variety of handicrafts, copperplate and pottery.
Eventually, after an entertaining day, you are going to spend the night in a Riad.

After breakfast, we are going to continue towards our next destination, “Ifrane”, also known as “Switzerland of Morocco”. passing through Atlas mountains which contains the largest forests of cedar trees, that is inhabited by monkeys. After a quiet stay. we will resume towards the tizi ntalghamt pass to Midelt passing by the spectacular Ziz gorges. we will head out to the magnificent Merzouga via Erfoud, passing by the spectacular ziz gorges and Errachidia Where you are going to eat a traditional lunch among Berber people and there hospitality. Next we will continue towards merzouga along Ziz Valley, and stopping for what we like to call it ” a worth stop” for the panoramic views along the way. When arrived to merzouga, you will be welcomed by a warming mint tea to restore, then will switch to camels, that will take you through the magnificent world of the sandy dunes of erg Echebbi . In a memorable experience on the top of the camels you will admire the spectacular sunset in the Middle of the Sahara.
Eventually, the camels will take you to our traditional well equipped camp, where you will enjoy a traditional dinner, while listening to a berberine music show, in a friendly mood under the stars.
Overnight in a nomadic camel hair tent.

In the morning, before breakfast, it’s recommended to wake-up early so you cannot miss the spectacular sunrise of Merzouga in the middle of the Sahara. Afterwards we are going to ride camels back to the hotel where you can take a relaxing shower and a breakfast before resuming our tour towards todgha gorge one of the most spectacular canyons around the world passing by the beautiful ziz Valley, in todgha you will have the opportunity to hike among local people to enjoy todgha’s Beauty.
Eventually we will reach Dades gorge, where you will spend the night in a traditional kasbah.

In the morning, before breakfast, it’s recommended to wake-up early so you cannot miss the spectacular sunrise of Merzouga in the middle of the Sahara. Afterwards we are going to ride camels back to the hotel where you can take a relaxing shower and a breakfast before resuming our tour towards todgha gorge one of the most spectacular canyons around the world passing by the beautiful ziz Valley, in todgha you will have the opportunity to hike among local people to enjoy todgha’s Beauty. then Ouarzazate also known as ” African Hollywood “, passing through the enjoyable thousand Kasbahs passing by tiny Berber villages where you can take some great pictures. Next you are going to head out to explore the famous Kasbah of Ait-Ben-Hadou, a world Heritage site, which was a part of many universal films such as “Gladiator” . Afterwards, you are going to experience the beauty of atlas mountains via the road of Tizi-n-Tichka the highest road in Morocco with an altitude of 2260m, offering you charming views as far as the eye can admire, valleys, oasis, mountains, and Berber villages.
Eventually, arriving to the red city “Marrakech”, where you are going to stay in a local Riad.

After breakfast at your accommodation, we will prepare for an exciting experience of exploring the magnificent city of Marrakech, our guide will make sure to show you every important places, starting with :
The Majorelle Gardens & Berber Museum, also The Rahba Kedima is a colorful market filled with a wide collection of spices from Cumin, Cinnamon, Saffron, Dried Pepper and more. You will inhale different perfumes while walking through the market ; The Jewish Mellah, the bahia palace, the magnificent mosque of koutoubia, also la minara, and finally the Saadian tombs.
Dinner and overnight at the Riad.

After breakfast we will drop you by Marrakech’s international airport, based on your flight schedule, where unfortunately our unforgettable journey is going to end.